The topic of this assignment is wearable computing. Your team will create a physical prototype of an interface that can be worn on the body. Maybe it interfaces with a smartphone or smartwatch app, or maybe it's a device that you can fully operate without any screen at all.

For this Team Prototype, your design should meet at least the following specifications: 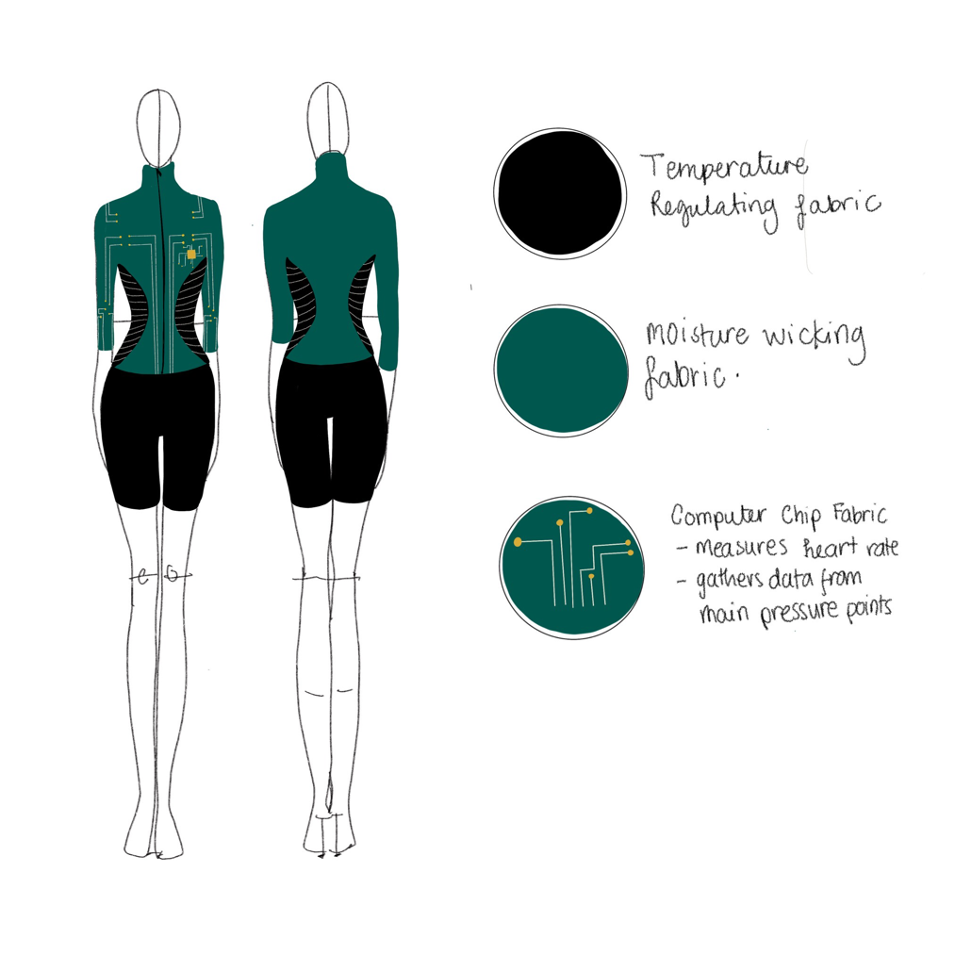 We started with a general idea of how we wanted the jacket to operate. 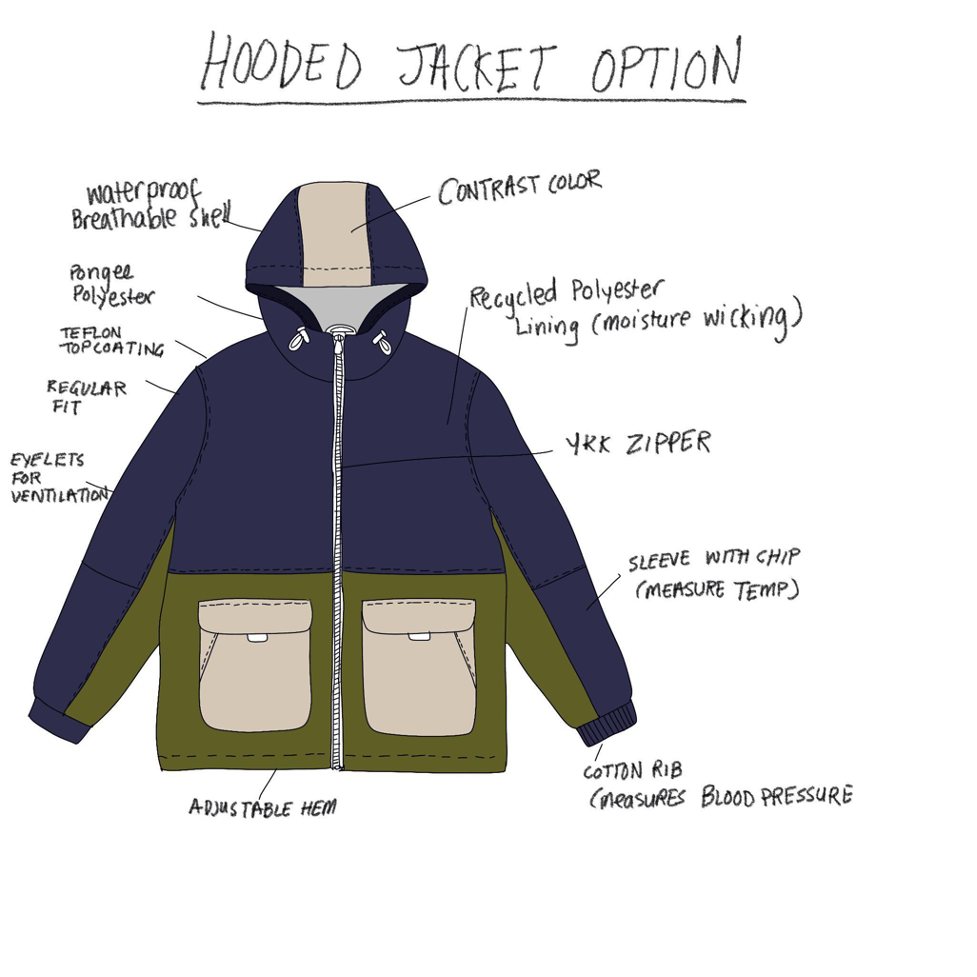 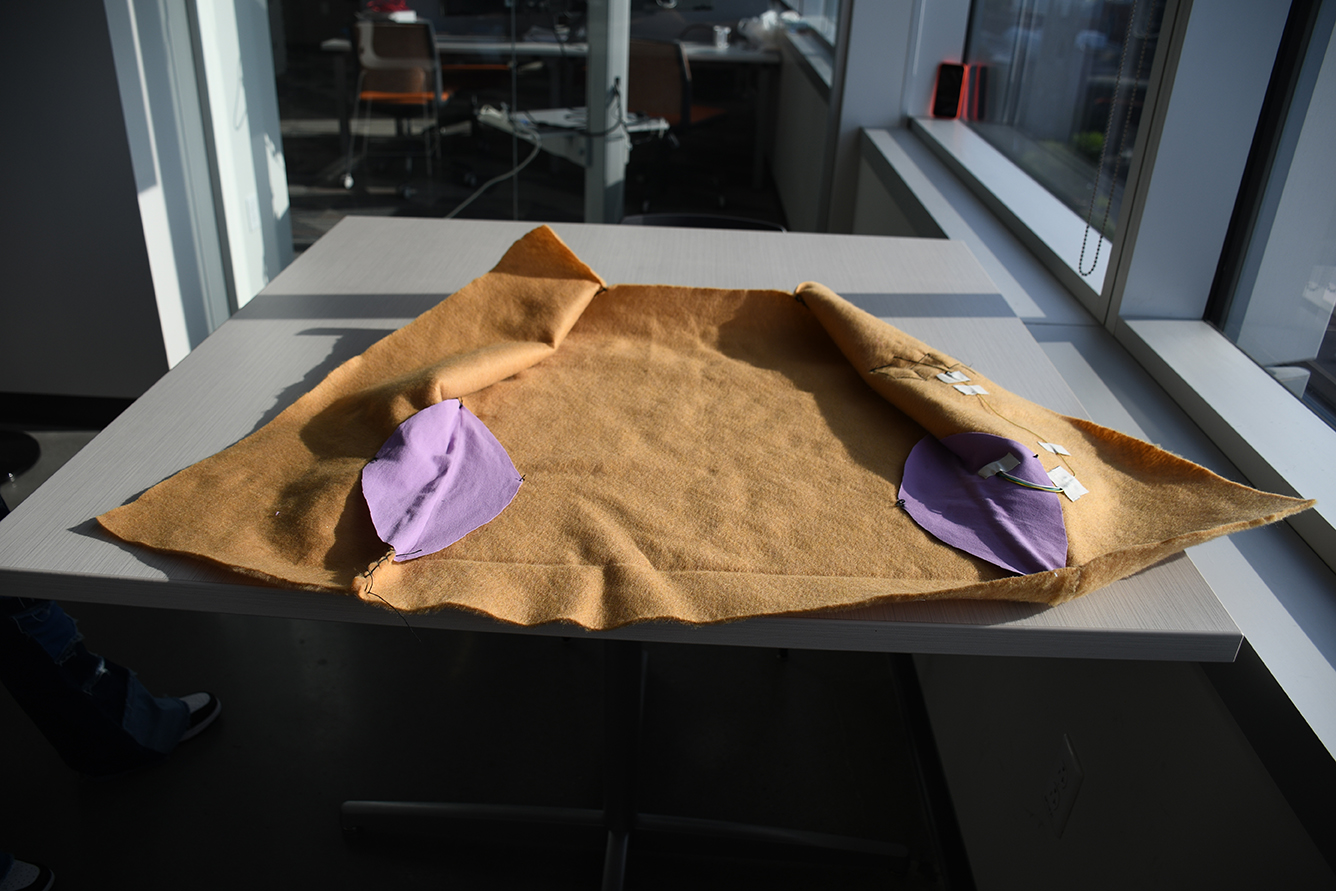 Advanced sensors and biometric measuring data is woven into a prototype. The fabric is fleece-like and not vey comfortable. 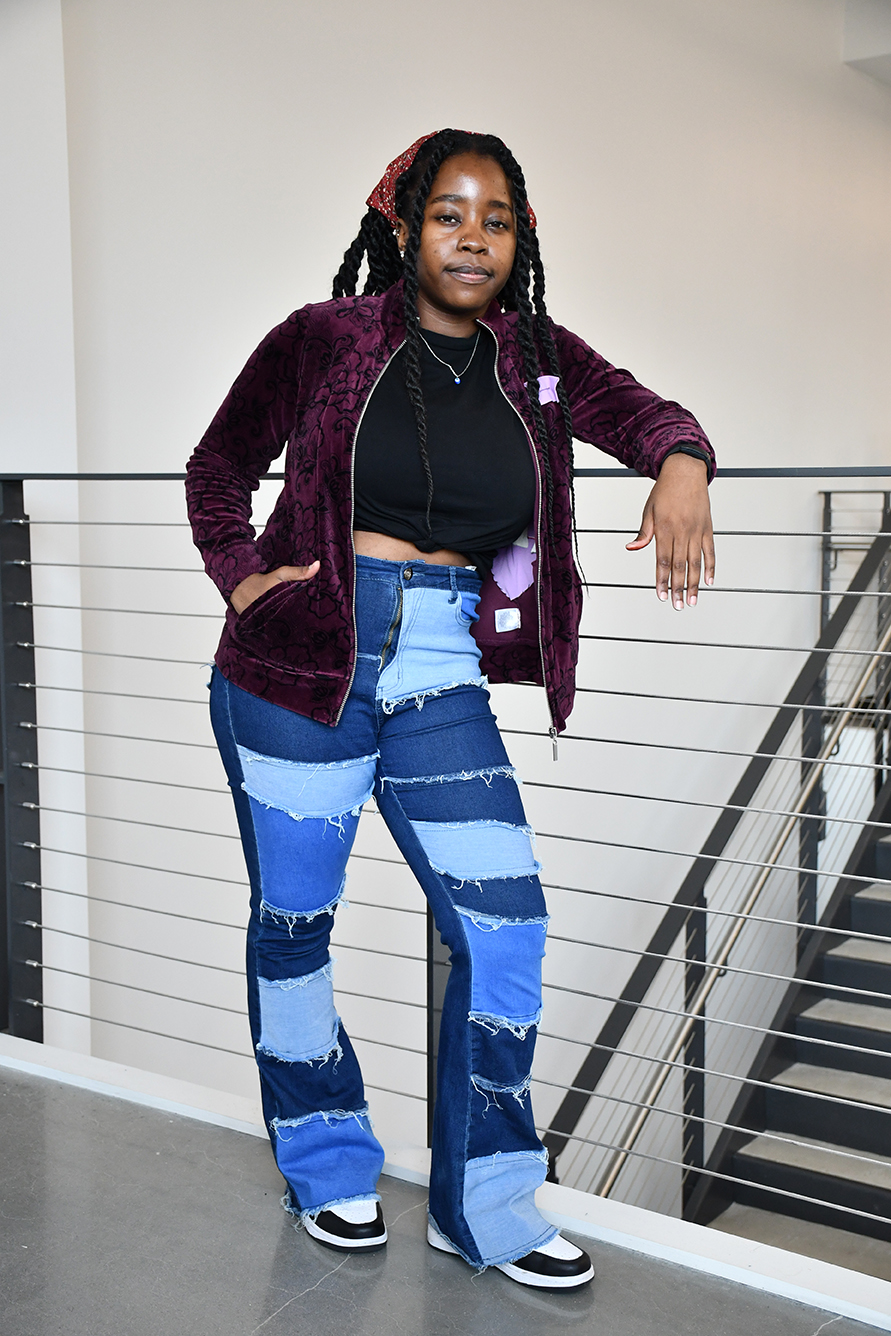 The jacket was re-worked while considering the foundational technology. The result was a sleeker and more comfortable prototype, using lightweight fabrics that were breathable. 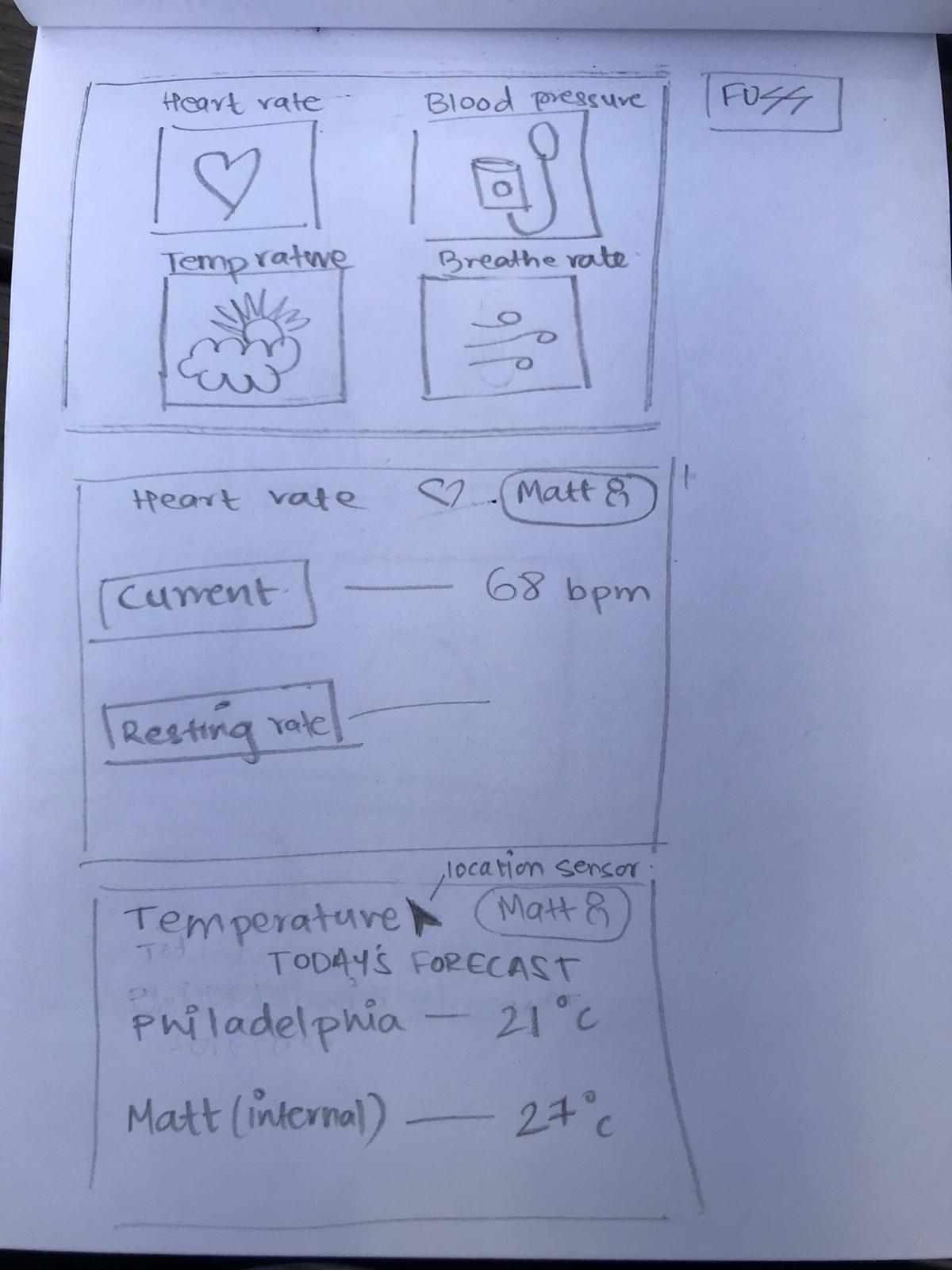 Next was the app design

Rough sketches of what the app should include were drafted.

What should the application include?

We transformed the sketched wireframes into an intuitive UI. 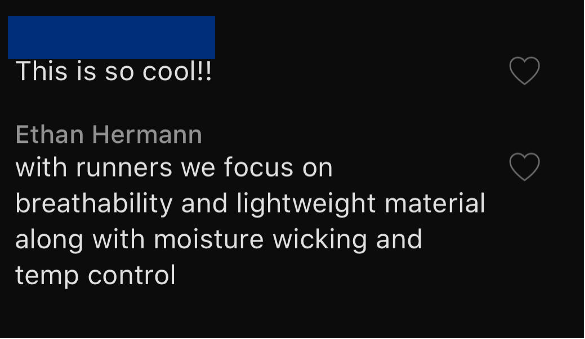 Feedback 2: Female respondent (a track and field athlete) via an audio message:

"I love the concept of this jacket, and I think it would be helpful for many people, especially those who are 40 years +, and anyone that needs to monitor their heart rate. I love the one-time synchronization, too, kind of like with headphones; you only have to sync them once, and it works. A suggestion is, what if when you zip up the jacket it automatically engages through the action of zipping up instead of pressing the logo? I think that would be cool."

It was pulled together into a complete prototype demonstration

While doing this prototype, we took a general approach that was design-focused but also approached this from a marketing/advertising perspective. It was challenging to develop something that seemed like a direct competitor to giants like FitBit and Garmin yet unique. In addition to learning about and researching wearable technology, we also had to research fashion and fabric design as no member had a background in this sector.

Fabric- The fabric was a challenge as the fabric should be resistant to different weather conditions and lightweight and breathable for the user who intends to use it for longer.

The first physical prototype uses a more dense, fleece-like fabric for colder weather. The second prototype was created based on the feedback received on the first one. Yet this seems to be an area that we could further explore.

Display- The initial idea was to go for a display that makes the jacket an independent wearable, but the choice to add the app made the jacket more accessible. Also, the assumption was that most users are familiar with apps (separate from a mobile device or linked to a mobile device), making the app interface easy to learn.

Sync - The choice to sync it with other devices or other trackers is something that we can further explore. There is a scope for linking it to other trackers for advanced users and users that want more detailed health and body tracking.

App - Critiques from class members yielded feedback on the app -- some elements were a little too small to observe, especially if you're look at it while running. Suggestions were to make elements a little larger.